What is a Catalytic Converter

For long life and durability. The ribbed body minimizes expansion and distortion, as well as forming channels that protect the cushioning mat from direct exposure to exhaust gases.

The substrates are the backbone of the converter. This is where the proprietary mix of precious metal(s) and the washcoat formulated to store O2 allow the conversion process to take place. Converters are available in single- or multiple-substrate designs.

The mat cushions the converter substrate, holding the ceramic catalyst in proper alignment. Creates a seal between the substrate and body, making sure all exhaust goes through the catalyst. Allows for thermal expansion of the body.

Deflects heat created by the converter away from the vehicle’s undercarriage.

Another vital part of an emissions control system. These sensors are placed before and after the catalytic converter on an OBDII vehicle. They are designed to monitor the O2 storage efficiency of the converter. This information also allows the PCM to adjust fuel controls.

Evolution of the catalytic converter

In this design, exhaust gases are directed to flow through the substrate containing precious metals platinum and palladium, which allow the chemical reaction to occur. The exhaust gases increase in temperature as the conversion process takes place.

Because of the intense heat created by this process, exhaust gases leaving the converter should be hotter than the gases entering the converter. This also explains why heat shields are required on most units.

Three-way plus air converters were used in vehicle emissions systems in North America during the late ’70s and early ’80s.

Inside this converter there are two substrates. The front, coated with the precious metal rhodium, is used to reduce NOx emissions into simple N2 and O2. This process is most effective when little O2 is present (rich mixture). That is why it is located upstream of the air tube.

Since a rich mixture is high in HC and CO, an air pump and tube supply additional O2 to this mixture before it enters the second substrate.

The second substrate, coated with the precious metals palladium and platinum, allows oxidation of HC and CO to less harmful emissions CO2 and H2O.

This system was not very efficient and was phased out in the early ’80s, when the current three-way converter was introduced.

Three-way converters have been used in vehicle emissions control systems in North America – and many other countries – since 1981.

The three-way without air uses advanced catalyst chemistry to store and release O2, in conjunction with an O2 monitoring and control system.

This system utilizes one or more O2 sensors to oscillate the fuel mixture between lean and rich conditions. This oscillation, combined with the O2 storage and release on the catalyst surface, allows for optimum reduction of all three emissions.

Three-way converters are used in conjunction with OBDII diagnostic systems on today’s vehicles. This system alerts the driver when the converter is not working at peak efficiency.

Why a catalytic converter Fails

Any malfunction causing an unusually high level of HC or CO (in conjunction with high levels of O2) to enter the converter, will dramatically elevate its temperature.

NOTE: Temperatures in excess of 1600º F may damage catalyst, without visible signs of melting 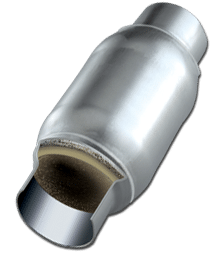 Catalyst poisoning occurs when the converter is exposed to emissions containing substances that coat the working surfaces, enveloping the catalyst to the point it cannot contact – and treat – the exhaust.

The primary cause of structural damage is road debris striking the converter. Normally, some evidence of impact is visible on the converter shield. 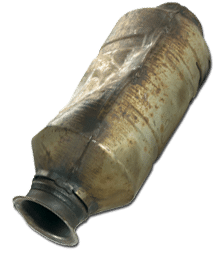 How do you determine what universal converter to use?

What makes a converter become red hot and/or melt the brick (thermal melt down)?

Converters will get red hot when excess fuel is introduced directly into it, along with sufficient oxygen to burn the fuel. This is not a problem with the converter itself, but the result of a problem with the fuel system or ignition that allows unburned fuel to pass through the engine and then travel down into the converter. If the root cause is not corrected, the new converter will melt as well. Common causes of a melted converter are: 1) A three-way plus air vehicle running rich, and when the air is injected into the converter, the rear brick will melt as the excessive fuel now has enough oxygen to burn inside the converter, 2) Vehicle is running rich with an exhaust leak, and when the air is drawn into the exhaust pipe and is combined with the excess fuel, it will burn in the converter, 3) The vehicle has a misfire. When the air-fuel charge leaves the combustion chamber without firing, it will travel through the exhaust pipe and burn in the converter.

What has caused my converter to become plugged (loss of power)?

If a converter is operated too long at a high temperature, the substrate may “melt down” and turn into a solid mass inside the converter. The vehicle may seem sluggish as if there was a loss of power. Other causes might be: 1) upstream converter has broken up and the debris has clogged a down stream unit, 2) the support mat may have become damaged and no longer retaining the brick in the correct position, allowing the brick to shift and block the exhaust flow.

What is chemical contamination of a converter (poisoning)?

If a replacement converter fails after a short period of time, then the root cause of the original failure has not been addressed. Some causes are contamination by silicone based sealants, coolant leaks, oil blow by, high sulfur fuel, and/or rich fuel mixtures forming carbon deposits can quickly coat the substrate preventing it from working effectively.

In August, 1986, the U.S. Environmental Protection Agency issued new EPA converter guidelines for the construction, efficiency and installation of aftermarket converters. The converters listed in the Walker catalog have been designed and manufactured to meet the EPA policy and emission reduction requirements. For further questions in regards to using and installing an aftermarket converter, please refer to the following EPA document http://www.epa.gov/otaq/cert/factshts/catcvrts.pdf

What is a three-way converter?

How do I determine if I have a California emissions vehicle?

Can I remove a functioning converter?

No. You may not remove or replace a functioning converter.

Can I use a standard universal type converter on a vehicle with a diesel engine?

No. A diesel engine has different emission requirements and a gas engine converter will not function on a diesel engine.

Is there a dimensional difference between a 49 state legal converter which shows Federal or California options?

The internals of my catalytic converter have melted down after a few months of it being installed on my vehicle. Was my converter faulty from the factory?

No. Converter meltdown is primarily contributed to an engine misfire. The unused air and fuel resulting from an engine misfire will cause an intense fire inside the catalytic converter damaging it internally. Normal operating temperatures of a converter are 500-800° F, and up to 1200° F when the vehicle is under heavy load. To melt the catalytic converter’s substrate, the temperature inside the converter would have to exceed 2000° F.

Will replacing my converter with a new one eliminate the P0420/P0430 code from coming on?

There is no guarantee that replacing the converter will keep a fault code from coming back. If an engine performance issues exist, and it has not been repaired, the P0420/P0430 fault code may recur.

Why did my converter fail?

Typically converter failures fall in to one of the following categories:
Physical damage due to corrosion, or from the converter contacting a large object on the road surface.
Contamination – due to excessive oil consumption, internal coolant leak, or excessive carbon build up.
Melted substrate – due to engine misfires which lead to excessive converter temperatures.
Thermo quenching – hot converter is cold quenched when driving through deep water or into deep snow.
Converter aging/lack of engine maintenance – cycles of damaging engine conditions will eventually deteriorate converter performance.

Why is my “Check Engine” or “MIL” light indicating that I have a “P0420 “Low Converter Efficiency” code; does this mean the converter needs to be replaced?

A P0420 low efficiency code does not always indicate that the converter needs to be replaced. On newer vehicles a low efficiency code will can occur if the exhaust feed gases are not of the proper balanced to allow the converter to operate efficiently. An experienced emissions technician may be able to identify and resolve this concern with a scan tool, the most effective way for most technicians to diagnose this condition is through the use of a 5 gas analyzer.

Are there any steps my technician can take to prevent my new converter from failing prematurely?

Yes,
Since converters are designed to last the life of the vehicle the technician should identify and correct the root cause of the original converter failure.
The technician should make sure any other codes are corrected prior to installing the new converter. This is especially true for misfire, mass air flow, rich/ lean conditions, and O2 response rate codes.
Pressure check the cooling system to test for leaks which will contaminate the new converter.
Repair any exhaust leak that may be present. An exhaust leak may affect converter and O2 sensor operation.
Check O2 operation: The front sensor should have good frequency, amplitude, and response rate and average 450mv. The rear should be fairly steady at idle and above 450mv (typically 650-850mv).
If both of the above O2 sensor readings are not present, the vehicle should be checked with a 4 or 5 gas analyzer and repairs should be performed.

A cleaned engine is a healthy engine!

A preventive cleaning will allow you to regenerate the parts in the first place to avoid their replacement and to save on the exchange of a turbo, a catalyst, a FAP, or a valve EGR which remain very expensive operations.

Have the reflex Carbon Cleaning because the fouling related to calamine is the new flail of engines. 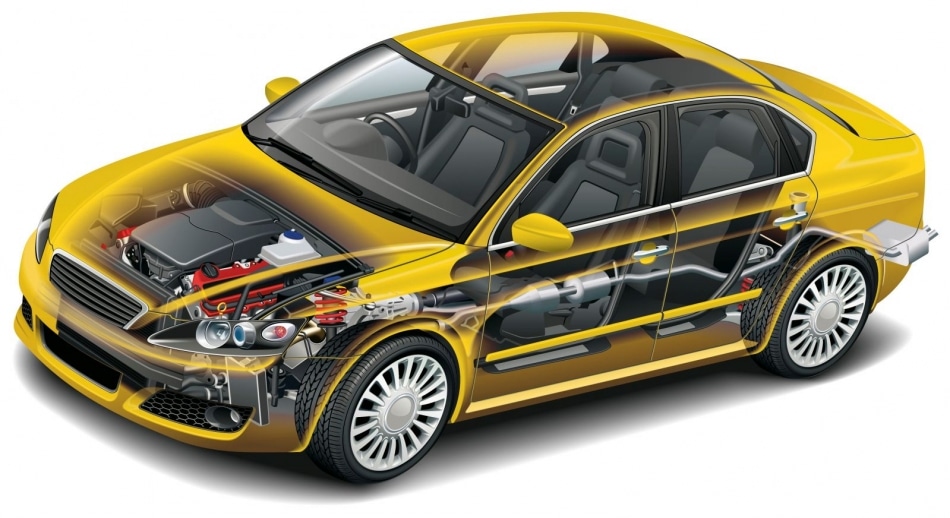 Become a distributor-partner of Carbon Cleaning

As a member of the Carbon Cleaning network, you are an independent vendor. To help you grow your business, we put all of our experience and expertise at your disposal.

Contact us with any questions or for more information about how to become a partner.

Become a distributor-partner of Carbon Cleaning

As a member of the Carbon Cleaning network, you are an independent vendor. To help you grow your business, we put all of our experience and expertise at your disposal.

Contact us with any questions or for more information about how to become a partner.

Our team is available to answer all your questions. Don’t hesitate to contact us!